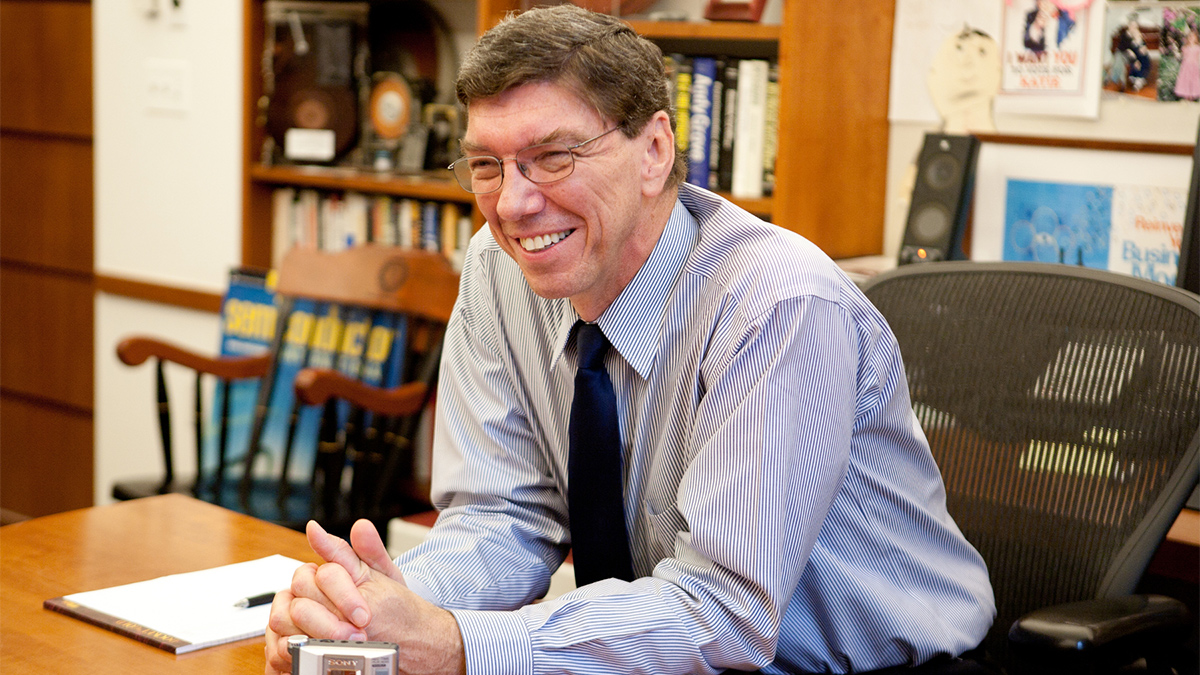 I first walked into Clay’s office a decade ago, when I was the editor of Harvard Business Review and in search of an extra article to help fill out a pending double issue of the magazine. It was the spring of 2010, and I was curious how the soon-to-be-graduating class was feeling about heading back into a world crippled by the recession. I’d heard from Harvard Business School students that Clay had been asked to speak to the graduating class and that the students had been extraordinarily moved by what he said. When I sat down in his office that day, I was focused on my deadline. When I left, an hour and a half later, I was focused on my life.

What did we talk about that was so powerful? We talked about a handful of Clay’s business theories. But as had been clear to the students a few weeks before, Clay’s thinking was extraordinarily relevant not only to businesses, but to individuals. Every question Clay asked, every theory we discussed, resonated with me, personally. We talked about how companies go wrong in their quest to grow. How their strategy is formed through hundreds of everyday resource allocation decisions. As I’ve reflected on our original conversation in the years since then, I can see the discussion peppered with my own evolving thoughts. Was I actually allocating my own precious resources — my time and energy — to the things that mattered most to me? Did I have a strategy for my life? Did I have a purpose?

My time with Clay that day began what became a months-long soul search and subsequent restructuring of my whole life. I resigned from HBR, with good will on both sides, and began to pursue a balance of work and life that better matched my personal strategy. That’s the beauty of Clayton Christensen’s theories: They help us put a new pair of lenses on the problems we’re trying to solve. Our meeting that day also led to the Harvard Business Review article, “How Will You Measure Your Life” – and a subsequent decade of collaboration as co-authors. Though now the word “co-author” seems so inadequate to describe the hours and hours of time I was able to spend with him working through our ideas. For the past decade he has been my coauthor, my teacher, and above all, my friend.

I’m not alone in acknowledging the personal impact Clay had. In the days since his death, the internet has been flooded with people sharing memories of how Clay had profoundly influenced them. As has been widely noted, an entire generation of Silicon Valley legends owes its success, in part, to Clay’s theories. The only business book that Steve Jobs had on his bookshelf was The Innovator’s Dilemma. Intel’s Andy Grove, Amazon’s Jeff Bezos, and Netflix’s Reed Hastings have all spoken about the profound influence of Clay’s work. We once made the rough estimation that Clay’s theories have helped create entirely new industries and led to billions of dollars in revenue, hundreds of companies, hundreds of thousands of jobs.

But Clay was not interested in reaping the rewards of the fame that came his way after The Innovator’s Dilemma. He was much more interested in continuing to help people solve their problems. He cared as much about the success of Clinicas del Azúcar in Mexico  (a startup focused on reframing how diabetics in Mexico received healthcare) or Southern New Hampshire University (which refined online education to help thousands of later-in-life learners earn the credentials they need to build a better life for themselves) as he did any of the big venture-backed technology companies that have dominated the headlines in recent years.

Clay saw innovation as a way to make solutions to challenges affordable and accessible to many more people. His health struggles in recent years only made him more determined to do that. Undaunted by the physical challenges brought on by his stroke in 2010, he simply explained to people that occasionally he couldn’t grab the right word, but to bear with him while he found it. And it was, indeed, always worth the wait. Knowing his health was failing him seemed to spur his thinking even more. There was an unspoken urgency to refine and share his ideas so that others could use them to make the world a better place.

During hours of conversation over the years, Clay and I discussed a wide range of topics — from how his time as a missionary in South Korea influenced his thinking about innovation, to what he learned about innovation from his own personal experiences with the health care system, to how innovation could lift nations out of poverty. There were so many problems that Clay wanted to help solve. He didn’t have the hubris to think that he, personally, could solve them all, but he believed that his theories could help others do that. Clay kept a jar of peanut butter in his desk because towards the end of the work day, he knew that if he allowed himself to wander the halls of Harvard Business School’s Morgan Hall in search of a snack, he’d be tempted to linger and talk with colleagues and students about a whole host of new problems and break his commitment to be home in time for dinner with his family. A spoonful of peanut butter at his desk would help keep him from getting distracted.

But, of course, his kind of “distraction” led to many, many powerful insights over the decades. It was fun to watch Clay’s mind work. Every conversation was an opportunity for him to learn something, and I marveled at how he would connect dots that others couldn’t even see. For Clay, it was all about asking the right questions. To Clay, a great question was worth more than a great answer. Because without the great question, we would never get to the right answer.

In an era of “add-water-and-stir” solutions to problems, Clay provided something much more enduring. He wanted to help people understand the causal mechanism of those problems, because until you understand what caused your problem, its solution is, at best, hit or miss in its success. Clay liked to say that “a good theory applies at multiple levels,” and I could see it in our work together. The theory of disruption is as relevant to the steel industry as it is to higher education and to health care. The theory of resource allocation — which explains how companies actually form strategy not in sweeping goals, but in the day-to-day choices about how employees use their time and energy — is also powerfully relevant to forming the strategy for our lives.

Clay’s email was often flooded with requests from well-known business leaders (and occasionally politicians) eager to learn what Clay thought about something. Clay was, at his core, a teacher. But he would have been the first to tell you that he didn’t teach us what to think. He taught us how to think. As we enter the age of AI and easy access to capital, the speed of innovation has gotten faster and faster, and it may be hard to imagine that decades-old business theories continue to have relevance. But I think any aspiring entrepreneur would be wise to revisit Clay’s work. The endurance of Clay’s thinking has taught me that a powerful theory is timeless. It may require fresh thinking about how it applies, it may require revisiting the context in which is it best used, but understanding the causal mechanism is always powerful. We just have to work out the right questions to ask. Clay has left that toolbox there for us all to use. We just have to pick up those tools and figure out how to use them for ourselves.

I recently asked Clay what he’d like to be remembered for. Not surprisingly, it’s not how many books he’s sold, how much revenue he’s helped generate, or how many times he was named the world’s most influential thought leader. He wanted to be remembered for his deep faith and his belief that God wants all of mankind to be successful. Clay’s part in helping to achieve that was to help individuals become better people. He measured his own life by the impact he’s had on others. I stand in a long, long line of people who will raise their hand to say Clay helped me to become a better person not because he provided me with all the answers to my own problems, but because he offered me a new set of lenses to see how to begin to solve them for myself.

There aren’t words to express my sadness at losing Clay. But there are many words to express my gratitude to him. He helped me understand the importance of doing work that I care about, with colleagues I respect, and to balance that with building a personal life of meaning as well. The chance to collaborate with him was a gift that I never took for granted.

Editor’s note: We have updated this text to correct the date of Professor Christensen’s stroke.